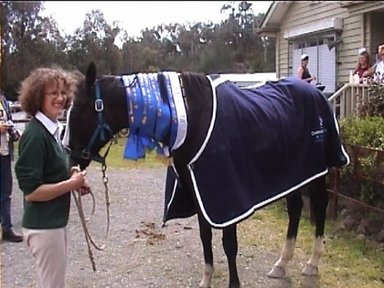 I am very excited to have a published author / illustrator on my blog. Thank you Lizzy,  for agreeing to this interview. Please tell us a little about yourself.

Firstly, I’m a country gal – but only since December. Born and raised in Melbourne, Australia, I thought I’d remain in the city/suburbs forever. But I was persuaded out into the rural outskirts five years ago and liked it so much that now I’ve made the big move out into real country. It’s heavenly out here amongst the rolling green hills of Gippsland. I live here with my sister and brother-in-law (that might sound weird, but there are two houses on the property) and our ‘family’ of seven horses, a pet Brahman bull, two dogs, a cat, a rooster and three hens. Almost all of our babies were saved from starvation, neglect or the knackery – my sister and I can’t resist rescuing mistreated animals and our family is sure to get bigger now that we’ve got more space.
I’ve been a horse rider since the age of nine and have owned, and adored, some wonderful horses. Unlike most horse-owners, I’ve never sold a horse, instead keeping them all into old age. My most loved was my perfect thoroughbred mare, Saldana – she carried me to many successes in show-jumping competitions.

My other big ‘hobby’ is sailing tall ships – I’ve sailed in eight different vessels and have crossed the Atlantic and Indian Oceans in the world’s two biggest sailing ships – both of them Russian. When there aren’t any ships around (which is most of the time), I’ll happily ‘mess about’ in little boats.

Please tell us something about your sailing adventures!  Have these experiences inspired you to write or to illustrate anything?

The Kruzenshtern is one of the great loves of my life. I’ve made three voyages in her: Puerto Rico to Bermuda to New York, Liverpool to Bremerhaven, and Fremantle to Durban to Cape Town. That last voyage involved a Force 11 gale off the Cape of Good Hope - a terrifying, mind-blowing, exhilarating experience. This beautiful ship was built in Germany in 1926 (her name then was Padua) - she was the last big engineless cargo-carrier ever built.

This ship is Sedov, the largest traditionally rigged sailing ship in the world (three metres longer than Kruzenshtern). I sailed in her across the Atlantic, from Tenerife to Puerto Rico. She was also built in Germany in the 1920s, as the Magdalene Vinnen. Both of these ships are now owned by the Russian Ministery of Fishing and crewed by Russian cadets (all male... so that was interesting...)

The tall ships I’ve sailed in inspired enough drawings, etchings and paintings for two exhibitions of maritime work - both pretty successful as I sold almost everything. They also inspired me into public speaking - which still amazes me as I am normally a very shy person. It’s surprising how a great passion and enthusiasm can override nerves! For over thirteen years I spoke about my tall-ship experiences for hundreds of clubs/groups/fundraisers all round Melbourne - these engagements only stopped when I moved into the country and changed my phone number.

It sounds like you have a wonderful life! How do you have time to make a living? Please tell us something about your career and how you came to it.

I don’t have time to make a living! Which explains why I’m always struggling to make ends meet. working freelance is probably not a good idea for someone as perpetually undisciplined and disorganised as I am.

When I am working, I’m a children’s book illustrator - I’ve worked for all of the major publishing houses in Australia. I loved drawing as a kid and being reasonably good at it, completed an art and design course at uni and ended up where most of my fellow students did - working in advertising. I eventually went freelance and, in a particularly stupid move, dropped all my commercial clients to concentrate on book illustration. Though I knew there was no money in publishing, I chose to do work I enjoy. Well... I have enjoyed much of it, but there are not enough good picture books published for children (especially in Australia with its small population) to keep illustrators in work. The ‘bread-and-butter’ work for us is in illustrating school text books and readers - and that work can be quite dull.

What are some of your favourite books / works of art and did they influence you in any way?

I read the classics almost entirely these days - Austen, Gaskell, Dickens, Trollope and especially Joseph Conrad. But the books that have influenced me the most are the fantasies I read as a kid and a teenager - Alan Garner’s books, as well as Tolkien’s ‘Lord of the Rings’ and ‘The Hobbit’, and Ursula Le Guin’s ‘Earthsea’ series. These books kindled my imagination and inspired me to pick up pencils, paintbrushes, biros... anything with which I could put my imaginings onto paper.

Another book that made a deep impression on me as a teenager was Josephine Tey’s ‘The Daughter of Time’. It began my lifelong passion for history - and led me to wonderful tours of Britain (hunting down sites connected with Richard III), and eventually to ocean crossings in the last of the great ‘windjammers’ of the 19th-20th centuries.

Which of your published works are you the most proud of?  Please tell us why.

Getting rather tired of illustrating other people’s books, I decided to write my own some years ago. It was a true story, based on a wonderful pony I owned at the time, and it was titled ‘Bertie at the Horse Show’. I sent it to only one publisher - Penguin - and they snapped it up straight away. It was published with my full-colour illustrations and with not a single word changed from the original text I had sent them. It was all so easy! Unfortunately I didn’t follow it up with another... but I have written a 160,000 word novel - which I am also quite proud of. It’s a fantasy - and the hero is a knight in armour who  - surprise, surprise - resembles a certain TDH actor that many of us are very fond of...

Getting something published at the moment though is horrendously hard work (and I haven’t tried very hard!)

What kinds of things do you prefer to draw?  (I am guessing horses and sailing ships?)

Yes, I do like drawing horses and sailing ships - but I’ll happily draw any animal. I’ve been doing a lot of commissioned pet portraits for people lately - which is a nice change from book illustration. I also love drawing people.

How did you become a fan of Richard Armitage?

I first saw him when ‘North and South’ was shown in Australia in 2005.  It wasn’t exactly love at first sight - it took till the end of the second episode... and then I was completely gone. I bought the N&S DVDs and must have watched them every day for the next six months. It was not just that he was the perfect cravat-wearing Period drama hero - I'd also realised that, with different hair and costume, he was the fantasy hero/medieval knight that I'd had in my head for years...

Can you tell us something about what you are working on right now. An adult fantasy novel, right?

Yes - I’ve finished my first fantasy novel with its RA inspired hero (a knight in un-shiny armour), and have started on my second which will probably turn into a trilogy. Unfortunately, I’ve discovered that writing books is MUCH easier than finding someone who’ll publish them.

RA inspired!! I am so excited!  Thank you so much for letting us know more about you. 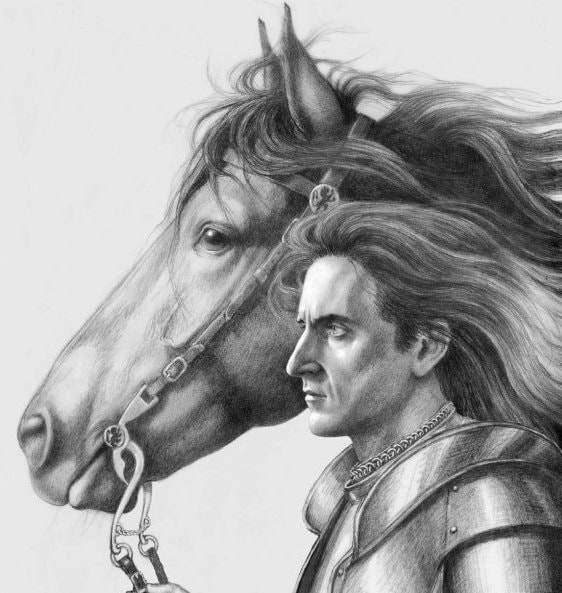 E H Alger is proud to endorse the following organisations: